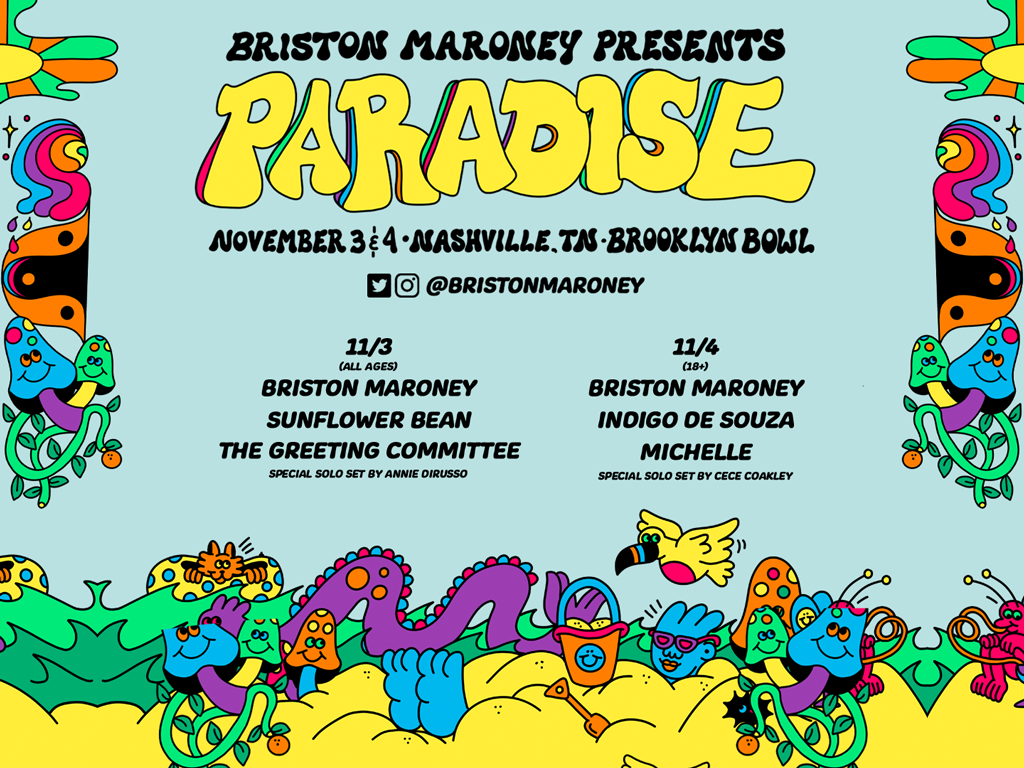 Want to have the total venue VIP experience? Upgrade your ticket today by reserving a bowling lane or VIP Box by reaching out to nashvilleevents@brooklynbowl.com

For Briston Maroney, it's been a journey to arrive at the current moment. A mental, physical, emotional, and musical one. But it's left him equipped: not only with a deep understanding of self, discovered through life's trials and errors, but just as important, with a piece of art that reflects his personal growth. Sunflower, Maroney's debut album, is the culmination of the past decade of the now-22-year old's life. "It's all of the things I've been stoked about since I was 12 coming together," the wise-beyond-his-years, Nashville-based singer-songwriter says with a laugh of his striking album. "It's been a literal and physical relationship with the record as far as coming to a point where I understand what parts of me it represents, what it means to me as a person and what it means for my entire life."

Recorded between the summer of 2019 and early 2020 in LA with acclaimed producer John Congleton, Sunflower is "definitely a milestone," Maroney admits. "I'd be lying to say I didn't feel a little bit of that. And why not let yourself enjoy it?" It's also a gut-punch of fuzzy power chords ("Sinkin") and genteel acoustics ("Cinnamon"); deftly-composed pop songs ("Freeway") and hard-charging rockers ("Rollercoaster"). "I put all of myself into it," Maroney adds of the 10-track LP. In retrospect, he adds, "I definitely have this sense of calmness now. I did what I was capable of doing and I'm just glad I was around my friends and my people to help me get to this point."

When Maroney began to tour the US and Europe alongside other artists, co-writing sessions became commonplace as they created music together while on the road. It was at this point he made the conscious decision that he would seek out additional songwriters and producers to work with on his debut full-length project; as Maroney's music world grew, so too did his desire for collaboration.

While Maroney is the first to admit he was 'terrified-in-a-good-way' to be working alongside top-notch talents with the likes of Manchester Orchestra's Andy Hull and venerated songwriter Dan Wilson on the creation of Sunflower, over time he came to understand a simple lesson. That being, "If you're approaching what you're doing from a place of love and kindness and passion you can be as open and flowing artistically as you want to be with your collaborators," he says. "I learned a ton from writing with those people," Maroney continues. "I think the biggest thing I took away is you get to decide how open you want to be, and you get to decide how much of a stage you want to set for emotions in songwriting."

If there was a sense of apprehension heading into such sessions, it's only because songwriting, for Maroney, has long been such a highly personal process. "It's been my journal for a really long time," he explains. "There's a beauty in songwriting. It's a scrapbook. It's a photo album. And if you're really putting your heart into what you're doing and writing songs for the right reasons, every one of them should take you back to a very specific place." For Maroney, the songs that comprise Sunflower take him along the long and winding path to the present, from his time as a young, upstart-tween musician busking at the Knoxville farmer's markets to playing dank basement gigs, sobering up amid personal struggles, and finally arriving right now at his most fully-realized self.

"Hopefully this record is representative of my journey," Maroney says, singling out the opening track "Sinkin" as summing up the record to him in a single cut. "Here's 100 percent of who I am," he says of the brash and bursting song. "It feels the most connected to my heart."

"I hope that people hear the record and see the songs as windows into what I've been experiencing and hopefully they'll relate to that," Maroney says, continuing. "I know these songs will continue to do that for me."

Working with producer John Congleton, Maroney explains, was about learning to trust his impulse. While Maroney had long been the first to question initial instincts, Congleton taught him to respect his gut. "He communicates really directly and really taught me a lot about speaking precisely and speaking about what you want to accomplish with a song and a record," Maroney recalls. "Whereas I have a tendency to be really abstract. I learned to be able to switch into that mode. He had my back the whole time."

Maroney gushes as he reflects on the session with Congleton that resulted in "It's Still Cool If You Don't." Their initial stab at writing together, "was the first experience of really letting go," Maroney contends of the song. "Just coming in and having a silly idea and being down to see where it goes." Working on "Cinnamon" alongside seasoned songwriter Jenny Owens Young, which Maroney describes as a "quieter more low-key song," was by contrast an exercise in "being all gushy" and exploring his feelings on love. "That was really fun to write a love song with someone else who was also in love with a person," Maroney offers.

Where "Rollercoaster," an older track that Maroney and his band typically closed out their sets with, was his attempt at getting a bit raucous, the track "Deep Sea Diver," which Maroney penned with Dan Wilson, was a far more meditative affair. Or as Maroney says with a laugh, "It's like, well, if this really pissed off angry rock thing doesn't work here's my best attempt at trying to be John Prine."

If anything, the process of assembling Sunflower was the best way Maroney learned to take his foot off the gas a bit and ease into his life in a more gratifying way. Where he admits at times throughout the recording process he was "squeezing it so hard," completing a brilliant debut album to him "was so much about just learning to be a little more laid back," Maroney says with a smile. "I still feel really connected to it, but I'm so stoked to share it and especially one day play it live," Maroney adds of Sunflower. "Right now, I am just so thankful and happy."

Indigo De Souza is a singer-songwriter from Asheville, North Carolina. Indigo is known for creating catchy, genre-bending songs that pull from rock, pop, neo-soul, and grunge influences. This sonic range is unified by Indigo’s strikingly confessional and effortless approach to songwriting, a signature first introduced in her debut, self-released LP, I Love My Mom. “I feel very much like a shape-shifter with my music, I’m always trying to embody a balance between the existential weight and the overflowing sense of love I feel in the world.” It is exactly this balance that Indigo strikes in her Saddle Creek debut, Any Shape You Take, released in August of 2021. A listening experience that gives back, as you shed and shape-shift along with her.

Cece Coakley is finding her sound in real time. Influenced by songwriting greats like Brandi Carlile, Taylor Swift and Phoebe Bridgers, Coakley has a knack for making ordinary moments feel monumental. Over the course of 2021, the 20-year-old singer-songwriter began turning her dreamy guitar ballad demos into fully realized songs. Her debut single “Cliché,” released earlier this year, has garnered over half a million Spotify streams to date. On her upcoming debut EP, Coakley digs deeper, skirting the line between indie and americana over sliding electric guitars. Musing about romantic clichés and hookup culture with a wisdom beyond her years, Coakley is an old soul living in the digital age. She has a gift for crafting moments into songs, a powerhouse voice to share them with, and nothing but time. 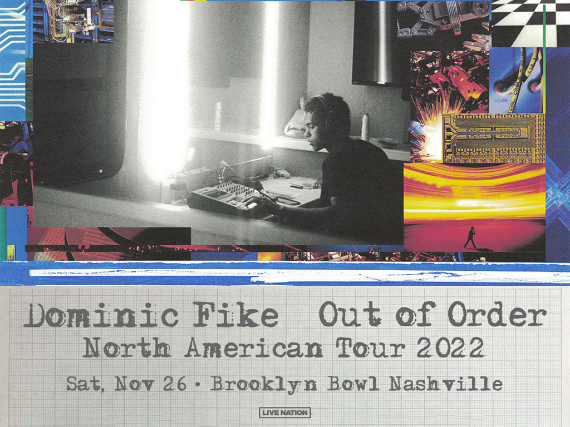 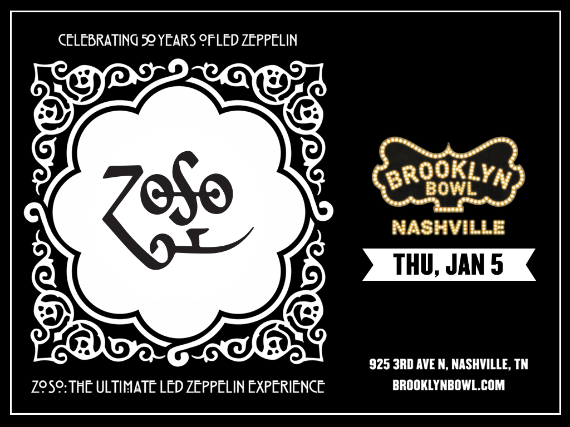 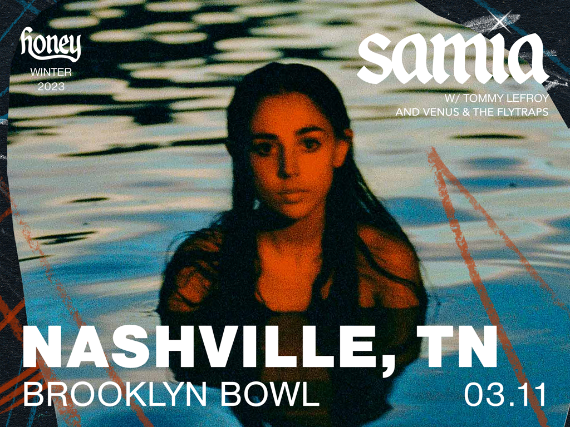