Add to cal
Tennessee is Dead 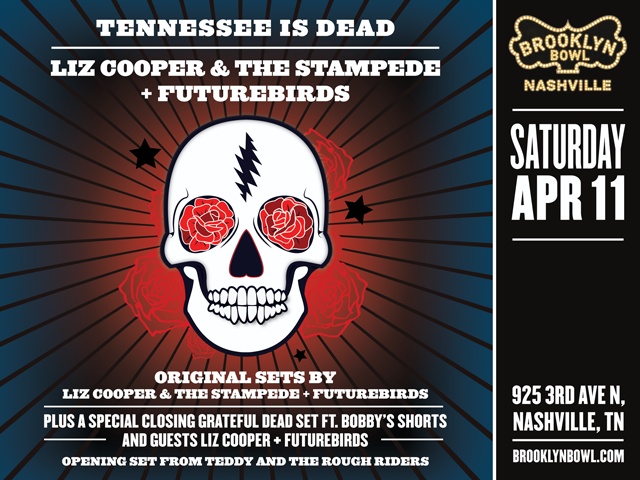 Teddy and The Rough Riders opening the night!

Due to circumstances outside of our control, we regret to inform you that this show has been cancelled. Refunds can be obtained at the original point of purchase.

Recorded at several studios (Portico, Chase Park, Rialto Row, Dialback Sound), the LP is a snarling devil-may-care batch of 12 tunes. It encompasses a seamless blend of hard rock, psychedelic alt-country and folk stylings — something signature to the unique sound, tone and attitude of the Futurebirds.

“We recorded this album all over the place,” says guitarist/singer Thomas Johnson. “In a lot of ways it kept us from bogging down, at times it was probably inefficient, but ultimately everyone of the songs captures the vibe(s) of the spaces and cities we occupied while we made it.

‘I’m Killin You’ really captures the vibe of the whole record for me. The main theme I had in my head while writing it though, was getting past the negative shit that can live on the periphery (or in the forefront) of life. Killing the bad side of human nature. Being self-aware, and being honest with yourself and trying to find peace with the person you’ve become or are becoming (or always were).”

“We’ve been putting one foot in front of the other for a decade now. Every tour, we get smarter about how we operate, how we craft a live show, how we utilize everyone’s individual talents,” guitarist/singer Carter King adds. “Every day, we become better songwriters, more comfortable as artists and producers, better business people — it’s all about teamwork.”

Now on the backside of a decade of road warrior hard-knocks and well-earned accolades, the Athens, GA rock sextet has been hitting its full stride as of late. It’s a sense of time and place where what’s most important remains at the forefront of the group’s philosophy and deeply-held personal mission — a group of friends making sonically innovative music.

“We have one of the oddest and most talented mix of people to make up a band that I’ve ever seen. Everyone is extremely talented in an assortment of different ways, hilarious, tough, creative, scrappy,” King says. “Stylistically, everyone brings something different to the band, and we’re getting better at simultaneously nurturing those differences, melding them together into one unified thing.”

With a touring schedule resembling some haphazard spider web spun across America, the Futurebirds are unrelenting in their quest to bring the melodic party to your hometown, no matter how far away the destination or how small the stage may be.

“And we’ve learned a lot about life along the way,” guitarist/singer Daniel Womack reflects. “Watching other bands rise and fall, watching the sunrise and the sunset, cried because it hurt, cried because it felt good, watching strangers turn into friends and some into family.”

“In a lot of ways the live show is the last frontier, the last thing left in the music industry that can’t be digitized and given away for free,” Johnson adds. “It’s the thing that keeps us coming back. The act of making something awesome and unique with six individuals, creating a sound-weave, connecting to the core of human existence, that’s the teamwork.”

Ultimately, the underlying message of the Futurebirds is making sure everybody feels included in the grand scheme of things — this absurd reality that is life itself — where compassion from both sides of the microphone and drinks held high, and in unison, is the name of the game.

“There’s a reciprocated energy between us and the crowd, where everyone is riding on that same wave together,” Womack says. “And when you’re in that moment, everything about this band life makes sense. The feeling that exists in that moment between the crowd and us — that’s why we do what we do. That’s Teamwork.”

There is a collective energy in Nashville, one that Liz Cooper has poured herself into for the past six years. Liz remarks that the energy in Nashville today is akin to that of Greenwich Village in 1960s New York or the Laurel Canyon days in the 1960s and 1970s and is a product of a collaborative approach to music and art. This community has allowed Liz to be a part of many magically haphazard nights, where the movers and shakers of the Nashville music world, such as Okey Dokey, Becca Mancari, Rayland Baxter, Desert Noises, Morning Teleportation, Erin Rae, Brittany Howard, Cage the Elephant, Michael Nau and many more converge to make music and art and lose track of time. Her latest album is a product of that pulsating energy in Nashville that has had some of the greatest influence in her work.

Window Flowers is the culmination of a year where Liz made a purposeful effort to do something creative every day. Whether it was directly related to music or not, this creative process challenged and inspired her to continually put herself in new situations and pushed her to become a better songwriter and guitar player. The tentative newcomer that is present in her early recordings was all but gone in the making of the album. Her absorption into the collaborative community is evidenced by guest appearances on Window Flowers including Will Brown (Michael Nau) on the keys, Michael and Ben Ford (Airpark) bgv’s/ guitar and songwriting, Gianni Gibson (Future Thieves) percussion, Leah Blevins on BGV’s, Emily Kohavi (Kacey Musgraves, Eminem etc.) on violin and Steve Dawson on pedal steel. Liz Cooper & The Stampede and their guests spent five days tracking Window Flowers at Welcome to 1979 in Nashville, Tennessee. TJ Elias, who co-produced the album with the band, sparked the relationship by approaching Liz one night backstage at The Ryman Auditorium after hearing her songs through a mutual friend and musician, Cody Huggins.

Window Flowers is a collection of music that deals with the weight of mundanity, and politely tells it to fuck off. When listening to “Sleepyhead” you hear remembrances of her early Nashville recordings, mixed with the powerful assertion that this is Liz Cooper, a force that will continue to shape and mold her own course of creating music. Whether you see Liz Cooper & The Stampede in a dive bar or a theater venue, you feel like you are being transported to another time and place. People often remark that her music takes them back to the 60s and 70s, when rock-n-roll felt alive, and bigger than oneself. The album will be released on Sleepyhead Records via Thirty Tigers (Sturgill Simpson, Jason Isbell) August 10, 2018.

Coming off their busiest year to-date, including playing Austin City Limits Festival for the first time in 2017, Liz Cooper & The Stampede have spent the first few months of 2018 touring with Lord Huron, Deer Tick, Rayland Baxter, Ron Gallo and Blitzen Trapper. The band will continue touring this year with Houndmouth, Tyler Childers and will play Firefly Festival and LouFest.

As Liz shakes her tambourine, hair falling in her face, donning a floral jumpsuit, it is hard to believe she identifies as a shy person. “I wanted to grow as a human and a musician so I had to quickly get over being painfully shy. I moved to Nashville as a scared and unconfident 19 year-old so I had to continually challenge myself and put myself out there. Now, as a 25 year-old I feel like I’ve grown so much confidence. Of course I will always be awkward, but I’m learning to love that. What a journey it’s been and will continue to be; definitely a hot puzzle. As I grow, my music will grow. Music is helping me figure out who I am and what the hell my life is all about and at the end of the day it just makes me happy. Isn’t that what everyone is trying to figure out how to be?”

Teddy and the Rough Riders