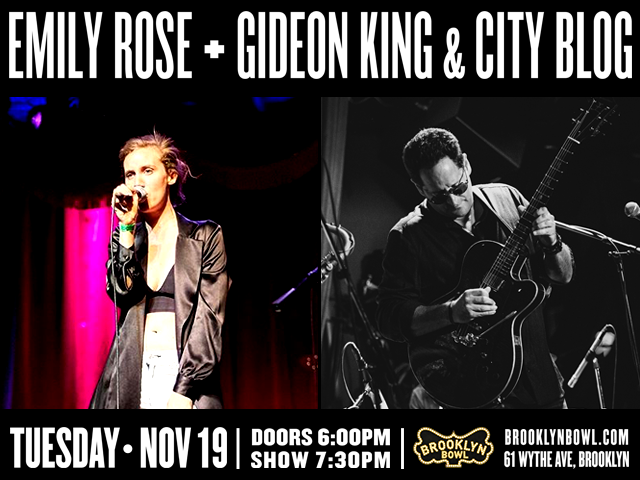 A born and raised New Yorker, Emily Rose is a alternative pop music-artist releasing her debut single 'No Longer Lonely' in June 2019. She is a singer songwriter, keyboardist, and producer of her music, which all began when she was fourteen years old. Her full EP, HEART, co-
produced by Bob Cutarella and Fran Cathcart, will he released this coming fall 2019. Emily is currently performing across New York, featuring all music from her upcoming EP. After two sold out shows at Rockwood Music Hall, shows at The Groove, Bowery Electric, and Garcias at The Capitol Theatre, she's ecstatic to continue sharing her music with audiences. You can see her current musical life on Instagram! (@thisisemilyrose).

In 2015, Gideon King & City Blog (GKCB) released a full-length CD, City Blog. The music was met with wide critical acclaim, with the Huffington Post calling King a “musical genius.” Having worked for years in establishing a reputation as a rising force in the New York Jazz scene, King has worked with.  John Scofield and members of Steely Dan and many other musical giants.

In 2019, King has released three singles.  The first single, “Lady of a Thousand Sorries” has over 350,000 steams on Spotify.   The second, “Audience of One” features Elliot Skinner, formally of the band Third Story.  King’s latest release, “Burning Through” is accompanied by a hauntingly beautiful music video that has over 20,000 views in its first few weeks.

Performing often at Blue Note, Joe’s Pub, City Winery, and having recently curated a showcase of vocalists for Sofar Sounds, King and the band show no signs of slowing down.