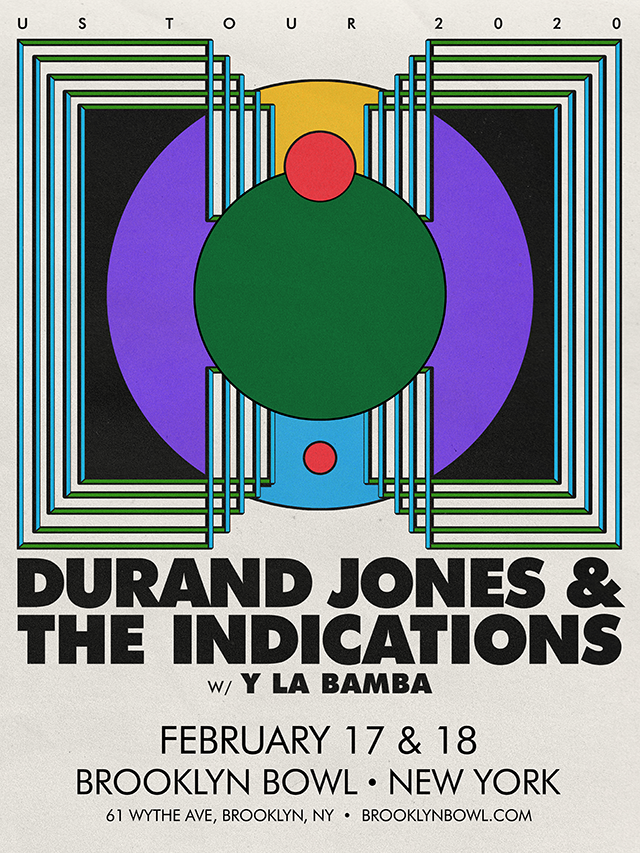 Meet & Greet and Photo with Durand Jones & The Indications

Durand Jones & the Indications aren’t looking backwards. Helmed by foil vocalists in Durand Jones and drummer Aaron Frazer, the Indications conjure the dynamism of Jackie Wilson, Curtis Mayfield, AND the Impressions. This young band of twenty-somethings are students of soul, including guitarist Blake Rhein, who moonlights doing research for The Numero Group. Even with that background, and an aesthetic steeped in the golden, strings-infused dreaminess of early ‘70s soul, the Indications are planted firmly in the present, with the urgency of this moment in time.

On American Love Call, Durand Jones & the Indications’ soulful sophomore LP, the band reckons with how to balance love and fury of modern day America. A fierce, fully-formed thesis, American Love Call is as grand and cinematic as it is focused on fleeting details.

Recorded for $452.11, including a case of beer, the Indications’ 2016 self-titled debut was the product of five friends who met as students at Indiana University in Bloomington, Indiana. Having met in 2012, the project was initially intended as a standalone recording project, with vocalist Jones, a native of rural Louisiana, joined by Frazer, Rhein, bassist Kyle Houpt, and keyboardist Steve Okonski. The album was released by renowned Midwest soul label Colemine Records, and quickly picked up steam on the back of the band’s booming live show and the enthusiastic recommendation of independent record store clerks across the country — who moved thousands of copies by simply playing the hell out of the LP in their shops for their discerning customers. The album was given another boost in early 2018 when Dead Oceans teamed up with the band and Colemine to bring the Indications to global audiences.

“Did I expect to do this shit once I got out of college? Hell no,” Jones relays, laughing. “Totally not. But this is what God is telling me to do – move and groove. So I’m gonna stay in my lane.”

American Love Call is the sound of Durand Jones & the Indications arriving. Opener “Morning in America” traverses the bleakest motifs of modern American life, channeled through the band’s own bold vitality: an old-soul croon made new, a glimmer of youth and hope burning at its core. Continuing into American Love Call’s widened scope, “What I Know About You” offers a true-blue, platonic love song while the dreamy, bossa nova groove of “Sea Gets Hotter” is about finding the person you want to be with at the end of the world. “Long Way Home” undulates with a funky bass line, sonics at odds with its somber subject, while “Court of Love” ripples with heartbreak, brooding and swaying. Jones oscillates between high-energy soul, pensive deep ballads, and harmonies, a sharp contrast to Frazer’s falsetto.

A vibrant through-line helping flesh out the Indications’ sound is the band’s love of sonic mish-mashes. Rhein and Frazer initially bonded over a love of crate-digging for rare 45s, and that vast musical appreciation and flexibility injects an accessibility into the veins of American Love Call. Frazer is as quick to point to Nas’ Illmatic and Jay-Z’s Reasonable Doubt as formative listening as he is to gospel, while Rhein is as likely to pull influence from a ‘70s folk-rock song, and Jones has a background in classical music paired with a longtime love of soul, R&B, and pop.

“Soul music’s been a part of my life for as long as I can remember,” Jones says. “I remember being a little kid and being in my dad’s truck, and whenever ‘Devotion’ from Earth, Wind & Fire would come on the radio, he’d swerve into the left lane, then into the right lane.” He laughs, pausing to clarify just how rural the part of Louisiana they’d be driving in was. “I remember that just being the most fun experience, when that song’d come on the radio, because he’d do that every single time. Soul music’s just always been present.”

Rhein explains that the Indications use their inspirations the same way hip-hop producers do, borrowing from the sampling mentality. Rhein and Frazer, along with bassist Houpt, all studied audio engineering at Indiana University’s Jacobs School of Music, and Frazer credits that to how they craft the Indications’ sound: the ability to listen at a component level, to zero in on what makes a record electrify the listener, and synthesize that with their own work.

As much as the diversion in taste is responsible for American Love Call, it’s where the Indications come together that’s just as vital to their songwriting. From a shared Dropbox the band used to circulate music in 2012 to their current Indications Inspiration streaming playlist, that group-think mentality and collective brain trust is what makes the Indications work, with each song proving a collaborative process.

The resulting American Love Call is a record made the way the Indications dreamed it’d sound, a sprawling and limitless equation. Recorded at Brooklyn’s Studio G throughout a few sessions last July and August, the focus here is on vocals as much as it is a newfound confidence in songwriting. The split leads between Jones’ husky howl and Frazer’s dulcet falsetto and a chorus of backing vocals lend a dynamic punch to the sound, fleshed out by the elegance of strings and an ambition to prove and push themselves.

American Love Call may make sprawling strides both stylistically and sonically from its debut, but thematically, the songwriting is a leap, too. Its title harkens back to “Creole Love Call,” a 1927 jazz standard popularized by Duke Ellington.

“We’re in a time when so many in this country romanticize the past – wishing to return to a place of simplicity and former glory. But the reality of our history can be disillusioning,” Frazer explains. “For so many in America, the past represents violence, oppression, fear and colonialism.”

“As America grows more diverse, we have the opportunity to form the strong, interwoven tapestry that we’ve long claimed. When we find a way to unite across our various movements and see the commonalities of our struggles, we can begin to push forward together. We can begin to see the threads connecting our goals as disparate rallying cries blends into a single song. An American Love Call.”