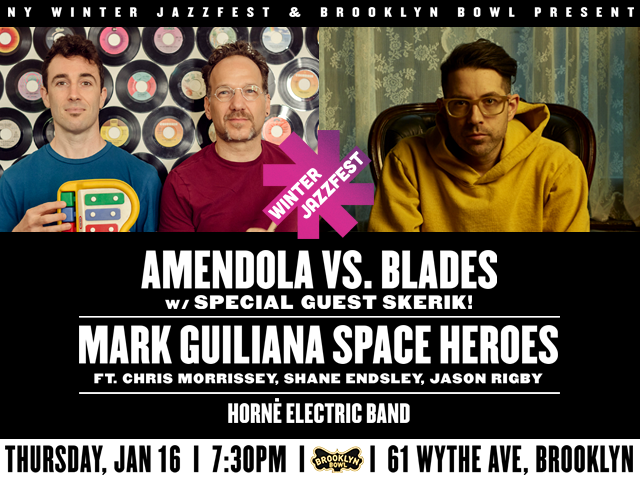 If told about a band that consisted of only keyboards and drums, one wouldn’t be faulted for thinking, “Where’s the rest of the group?” But one listen to Amendola Vs. Blades—the funky California-based duo of Wil Blades on Hammond organ and clavinet and Scott Amendola behind the kit—and all fears will be assuaged. Blades’s cutting solos and deep bass lines make for a thick stew of soulful harmony and daring improvisation. And Amendola’s beats are simply unstoppable, simultaneously pushing the duo to heights unknown and sending the listener into a joyful sonic trance. But, in a move away from their debut album, ‘Greatest Hits,’ the new album from Amendola Vs. Blades is bursting not only with creativity, but with personnel. ‘Everybody Wins’ features only three tracks that are exclusively duo. The rest of the album sees contributions from guitarist Jeff Parker (Tortoise), saxophonist Skerik (Les Claypool, Garage A Trois), percussionist Cyro Baptista (Herbie Hancock, Sting), and keyboardist Rob Burger (Tin Hat Trio, Laurie Anderson). Unsurprisingly, the music is as outsized as the roster of guest musicians. Moving between any number of styles and moods, ‘Everybody Wins’ is sure to expand minds and preconceptions.

The guests, of course, didn’t find themselves in the studio by chance. Amendola, for instance, plays alongside Baptista in the Nels Cline Singers, headed up by Wilco guitarist Nels Cline. And Parker and Amendola met at Berklee College of Music in the late ’80s, later appearing on the drummer’s albums, ‘Believe’ and ‘Lift.’ Parker also appears on Blades’s 2014 album Field Notes. Burger, a musical compatriot of Amendola in San Francisco circa the mid-90s, joins the duo on “Fabulous:Stupendous,” adding lush synth strings, and vintage keyboard sounds to the predominantly through composed Amendola composition. It ultimately propels the track into deep aural dimensions. Indeed, these musicians have more than just shared experiences in common; the additional players are coming from the same free-flowing arena that Amendola and Blades operate in.

“Jeff, Skerik, and Cyro are all extremely broad, versatile musicians,” explains Blades. “Scott and I are the same. They just fit with what we do; they straddle a lot of stylistic boundaries, all while maintaining their musical voices. We can go in so many different directions musically, and it’s really fun. Everyone is really open-minded and down to go wherever the music takes us!”

It takes them a lot of places. The opening “Hi-Lo” is a thrilling, dark-hued funk piece with some odd-meter progginess thrown in. “’Fess Up (Before Ya Mess Up)” is a New Orleans groove paying tribute to NOLA piano great Professor Longhair. “Wall Town” is a laid-back, but purposeful latin-jazz number featuring some shimmery soloing from Parker. And “Hambela” works with a boogaloo groove recalling Lou Donaldson’s Blue Note LPs from the late ’60s. But the standout track might be the epic “Metropolian Hustle,” which begins in an experimental vein before moving into jittery jazz and psychedelic dub. The song has a special emphasis on collectivity.

“‘Metropolian Hustle’ is more of a sketch of a song that’s about the ensemble with open sections, and not about individual solos,” says Amendola. “There’s a form, but when we play it live we’ll be doing a lot of cueing. We’re not counting bars. The idea is that the band, whether the duo or with guests, can play around with the melodies, etc. There’s a particular vibe happening in the three different sections.”

More than just a confluence of friends and influences, ‘Everybody Wins’ is a celebration of Blades and Amendola’s decade-plus adventure together. The musicians first united in 2006 to perform the Duke Ellington album Far East Suite and the ball hasn’t stopped rolling since. And despite a little distance on the horizon—Blades recently relocated to L.A.—there is no end in sight for the duo that sounds like an eight-piece band. The extra-musical bond keeps growing, too.

With a whimsical grin and a contagious beat, the Hornē Electric Band brings horn driven electro-funk to the stage. On the cusp of their debut record, the HEB has long tantalized audiences with dozens of shows in New York. They've been featured on BRIC TV and at Blue Note NYC among other places, and can be caught out after curfew regularly at The 55 Bar in the West Village. With vigorous trumpet sparkles, luscious saxophone dances and otherworldly electronic adventures over potent grooves, the groups' spirit and energy is nothing short of infectious.
More Shows
See All Shows
Search Shows