It is no secret that George R.R. Martin is a huge fan of the Grateful Dead. Not only has he been spotted in Mexico during Dead & Company's Playing in the Sand and in Chicago at Fare Thee Well back in 2015, but he even allegedly calls his home “Terrapin Station.” So it is no surprise that lyrics and references from the Grateful Dead’s music have made their way into Martin’s acclaimed series, A Song of Fire and Ice, which has been adapted to the hit HBO show, Game of Thrones. We put together a list of all the best references in the series in honor of the final season! 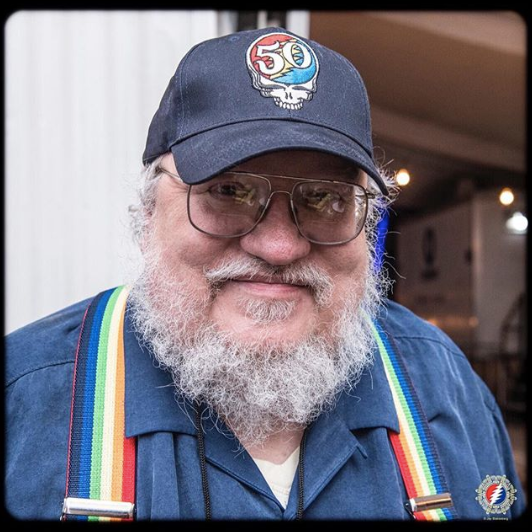 Perhaps one of the easier to spot references in the series, many have wondered if the Weirwood Tree is truly named after Bob Weir. Well, in a 2015 interview, Martin confirmed that it was! In the series, the tree is a symbol of worship. Although the majority of the trees were cut down by the Andals in an attempt to enforce their new religion, many Weirwoods still stand strong and tall in the land of Westeros. A comparison can be made between the tree's resilience and that of Bob Weir’s music as well. Unfortunately, Weirwood trees do not actually exist.

Arya Stark has been giving Jerry Garcia a run for his money recently, stealing faces across Westeros and Essos. Arya learned the art of stealing faces from the Faceless Men, a religious order of assassins who worship the many faced god (Jerry?). Whether or not Arya and the Faceless Men have been listening to “He’s Gone” is up for debate, but George R.R. Martin certainly has.

Ok, yes, Dire Wolves were actual prehistoric creatures that paleontologists believe lived in the Americas some 9,000 years ago. Although they have been referenced in history as well as other folklore, it’s safe to say that Martin was listening to Working Man’s Dead while writing the beloved wolves into the story.

In the lands of Westeros, there roams a knight dubbed “Darkstar.” His house is a cadet branch of the Daynes of Starfall. Although he is left out of the television series, it is clear that Ser Gerold Dayne’s moniker is derived straight from the Grateful Dead’s song of the same name.

6. Mountains Of the Moon

This song actually became the name of a location in Westeros. The Mountains of the Moon reside in the Vale of Arryn and make up most of the territory controlled by the House of Arryn. House of Arryn is also home to the Moon Door, a narrow Weirwood door in the floor that is used to toss people 600 hundred feet to their deaths.

In a recent episode, Daenerys and Tyrion discuss a theoretical wheel, symbolic for the constant struggle for power in Westeros. Each spoke of the wheel represents a different ruler - Lannister, Baratheon, and Stark all rise from top to bottom. This is the cycle of power that can be related to the lyrics of the Grateful Dead’s “The Wheel.” “Round, round robin run round, got to get back to where you belong.” 0

“Ah child of countless trees, Ah child of boundless seas!” No, this not a quote from the show, although it very well could be. These are lyrics from Bob Weir and John Perry Barlow's masterpiece, "Cassidy," that can be directly applied to Bran Stark, as he has the power to see through the eyes of animals and plants.

Although not directly mentioned in the show, we would be remiss not to give an honorable mention of Martin’s all-time favorite song, 'Ripple." He even quoted part the song in the same interview where he confirmed that the Weirwood Trees were named after Bob Weir, saying, “There is a road, no simple highway.”

Go ahead and strap in, cause this one’s a doozy. A woman standing in fire throws her fan into the lion’s den, as a soldier and a sailor fight for her love. This sounds like the story of Daenerys and her quest to gain back the throne, right? Well, it’s actually taken directly from the Grateful Dead’s “Terrapin Station.” The song tells the story of a storyteller who does not know the answer and a woman with glowing hair standing in fire. “While the storyteller speaks a door within the fire creaks, suddenly flies open and a girl is standing there. Eyes alight with glowing hair, all that fancy paints as fair, she takes her fan and throws it in the lion’s den.” Many believe that the song may allude to how the beloved series will end.