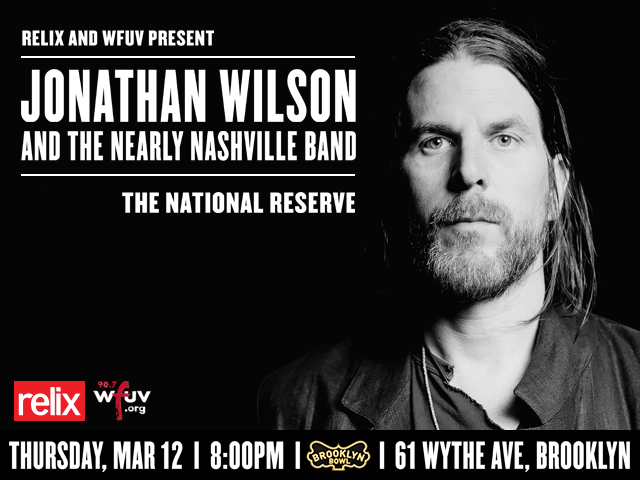 Refunds will be available at point of purchase.

For nearly half a decade, The National Reserve has spent Friday nights lighting it up at Brooklyn bars, winning over fans with epic sets and a remarkable breadth of song-craft and showmanship. With their 2018 release on Ramseur Records, Motel La Grange, the band has crafted a rich and raucous collection that instantly places them among Americana’s finest with its force, directness, and performance not unlike some lost recording unearthed from the golden age of 70's rock ‘n’ roll. Founded and fronted by singer-guitarist Sean Walsh, The National Reserve meld gutbucket R&B with New Orleans funk workouts, late night soul, and boozy rock ‘n’ roll to create their own timeless brand of music. The National Reserve is set to bring all the fun and fire of their fervent Friday night sets to the rest of the world, eager to pack as many folks into their late night scene as possible.

Where do you go after making an album that the Guardian hailed as “a rich, ambitious triumph”, American Songwriter called “a strikingly original, complex and inspired work”,  MOJO described as “a record you could lose yourself in for months”, and Billboard as a “most magnificent recording, one that is mandatory listening if you are in search of an immersive album rock experience in the 21st century”? It’s a question Jonathan Wilson asked himself after his “maximalist” album Rare Birds was released in 2018 to glowing reviews.  Not only did it earn him Album of the Year awards in Rolling Stone, France and Blitz in Portugal, it brought him his first national television appearances in the US, on Conan and CBS Saturday Morning.

Rare Birds had been the culmination of three solo albums in seven years that the singer, songwriter, multi-instrumentalist and producer released to widespread acclaim. His first, 2011’s Gentle Spirit, a beautiful California dream of an album, is a classic by now and it won him the admiration and friendship of Graham Nash, David Crosby, Elvis Costello and Jackson Browne.  His follow-up, Fanfare, was also well-received with Uncut calling it “a lavish musical epic, the work of a dedicated and stone cold studioholic.” But now Wilson was looking for something completely new.

In 2019 he appeared on the revered nationally-syndicated live music radio show eTown. “It was sort of bluegrass-based,” Wilson says, “and on this particular show I was playing with Steve Earle. Next thing you know, I’m talking with Steve about recording.” Earle advised Wilson that, if he had a bunch of songs written, he ought to take them to Nashville and make the record blind, since Nashville’s crawling with studios and top-notch session players. “And that’s how I got into the idea of going to Nashville and tapping into that sound,” says Wilson. “The sound of my home.”

Wilson was born in a small town in North Carolina. As a child he was raised on a mix of Beatles, 60’s and 70’s rock, country, and bluegrass. His uncle played in bluegrass legend Bill Monroe’s band. His father had a rock band, but he would often jam with local friends who could “moonlight on banjo and mandolin and do gospel harmonies that would knock you out. I would sit there and strum along,” says Wilson, “There’s this astute southern rhythm and musicality in western NC…. Then there’s this crazy three finger banjo style that you have to be really good at it because you’re from the place where Earl Scruggs is from. One of my father’s best pals was the music director at the Caroleean gospel church where my grandfather was a preacher and on the side he could pick the shit out of a mandolin. So, I was exposed to something super-authentic that I was soaking up. In hindsight, It doesn’t get more authentic than that.”

A musical prodigy himself, Wilson wrote his first song at three. He was also a musical polymath, playing drums, horns, woodwind, piano and guitar. He joined an R & B band at 14; left high school to study jazz with some old masters, and joined a rock band, Muscadine. He also became a noted luthier and a record producer. Among the artists he has produced albums for are Father John Misty, American band Dawes, British folk legend Roy Harper and Conor Oberst.

In 2017-18 Rogers Waters asked Wilson to join him on his US+THEM tour on guitar and as musical director. Wilson also sang all the David Gilmour vocal parts. On that two-year tour, Wilson would sometimes find himself thinking about his Southern home. “Stuck out there in a hotel in Latvia, it’s a long way from anything that feels like home or family. I felt I was subconsciously being led back to my roots.” In the new song ’69 Corvette’ he sings, I still think of Carolina sometimes. I miss the family. I miss that feeling. I miss home.

Those feelings were still fresh in his mind during that conversation with Steve Earle. Making his next album live in the studio with a Nashville band, instead of building them alone, piece by piece in his L.A studio, seemed like a good way to go back while simultaneously moving forward.  An example of that is Wilson’s new take on “Korean Tea”, an old song he had done with his ‘90’s band Muscadine. “That is a song about having a shining musical gift to share with the world. My brother says that’s one of the prettiest melodies I’ve written, so I decided to bring it back into the world”. “Heaven Making Love” is a song Wilson wrote for Rare Birds but abandoned; “I tried but I could never really get it, it had that locomotive  polka thing sorta so I guess it was waiting for an album like this to join!”

“I was thinking about fiddle as being an integral part of the record, and I needed to find the best. In my mind the best of the best was Mark O’Connor. So I decided to reach out to him. I said, ‘Hey man, I’m doing a session, would you like to come down and play fiddle?’ and he’s like, ‘Thank you, but I haven’t done a session since 1990.’ So, he didn’t say no and he didn’t say yes! Over time, he eventually said, ‘Maybe, but my only stipulation is it’s got to be with the band, no overdubs. That’s what drove me out of the session business.’ That was a big deal to all of us. Mark truly elevates the record and he shines as the most brilliant fiddler on Earth, I thank him for his beautiful melodies on this album.”

Working with this Nashville band gave Wilson the same kind of feeling he had as a kid, strumming along with those bluegrass bands. “There’s something about this level of musicianship, they’ve been in so many sessions. It was fun to play some of the more stoner canyon-ey tunes for this crack session band and watch them write up their special Nashville charts with their numbers, symbols and diamonds… they call it ‘hillbilly arithmetic” Over there….

The album was cut in only six days. “It was so fast it was a blur.” Hence the title, Dixie Blur. “And there really is a magic that occurs when musicians play together in a room and create that one consistent thing in time, something is created by the collective energy that is impossible to recreate otherwise,” says Wilson.

“It feels like another side, you know? Sort of like a personal, unplugged, just got off the road feeling. I think it’s the most down to earth and emotional both musically and lyrically that I’ve ever been.”
More Shows
See All Shows
Search Shows